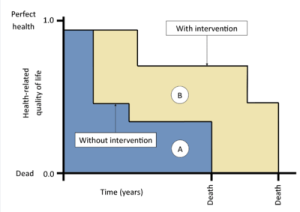 In many parts of the world, the value of medicines is measured by a unit called ‘Quality-Adjusted Life Year’ (QALY), a metric that health economists and others use to quantify the health benefits generated by a particular treatment. QALYs are often used by state-run health systems in many countries to help decide which drugs to cover.

QALYs measure the amount of time patients live after receiving a treatment, and the quality of their health. They provide a convenient yardstick for measuring and comparing health effects of varied interventions across diverse diseases and conditions. They represent the effects of a health intervention in terms of the gains or losses in time spent, in a series of “quality-weighted” health states. Some government-run health systems set rough caps on the amount, they are willing to pay per QALY.

However, use of QALYs can be controversial, as some critics feel they amount to putting a price on life. Drug makers have been among the metric’s biggest critics and a few even opine that there are well-documented disadvantages of using QALYs to assess the value of a therapy. The 2010 Affordable Care Act explicitly bans the government from using a cost-per-QALY yardstick, or any similar measure, “as a threshold to determine coverage” under Medicare, a provision for which the pharmaceutical industry lobbies. Spain is the latest addition to the list, after Germany and USA, banning the use of QALY in healthcare decision making, after considering that this approach methodologically and ethically lacks robustness.

The 2010 Patient Protection and Affordable Care Act (ACA) created a Patient-Centered Outcomes Research Institute (PCORI) to conduct comparative-effectiveness research (CER) but prohibited this institute from developing or using cost-per-QALY thresholds. The ACA specifically forbids the use of cost per QALY “as a threshold.” The precise intent and consequences of this language are unclear. One might interpret it to mean that the PCORI, or its contractors or grantees, can still calculate cost-per-QALY ratios as long as they are not compared with a threshold (e.g., $100,000 per QALY) or used to make a recommendation based on such a threshold. Comparisons of cost-per-QALY ratios across interventions could still be useful to decision makers even without the invocation of an explicit threshold. However, the ACA suggests a broader ban on the use of cost-utility analyses, which could eventually have a chilling effect on the field.

When asked how they would like to allocate society’s health resources, researchers tend not to favor QALY “optimization” strategies. Instead, they tend to believe that equally ill people should have the same right to treatment, regardless of whether the treatment effect (that is, the QALY gain) is large. Moreover, QALYs do not distinguish the aggregation of modest benefits to large numbers of people from a substantial benefit going to a few people. QALYs might not adequately capture preferences about the amount of time experienced in a health state, or the order in which health states are experienced.

Alternatives metrics to QALYs have been suggested, although all have limitations. Healthy-year equivalents (which measure preferences for life health profiles rather than discrete states) have been proposed, but their feasibility has been questioned, and the metric has not gained traction. Many health economists favor willingness-to-pay (WTP) metrics that involve asking people directly what they would be willing to pay for health improvements. However, such metrics require assigning monetary value to health benefits, which others find objectionable.

Finally, analysts could simply calculate separately the costs and health consequences of different strategies (sometimes called “cost-consequences analyses”) and leave decision makers to decide if any particular treatment is “worth it.” However, the method would sidestep explicit discussions about value and provides no guidance for allocating resources fairly or efficiently across treatments. A number of government health authorities, including those in Australia, the United Kingdom, and Canada, have incorporated cost-effectiveness considerations explicitly into coverage and pricing decisions about drugs and other technologies. Although few currently require QALYs in economic evaluations, there is a clear preference for them in these and other countries. Hence, the flexible use of QALYs could be beneficial.

‘Bolt-On’s For Utility Instruments: What Are They, And How Should They Be Developed And Used?

How Patient Records Abstraction Can Help in Healthcare Decision Making?

Taking Patients as Partners in Research